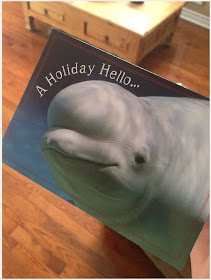 This year WWF Canada (World Wildlife Fund) has sent out a holiday card to its supporters featuring a captive beluga whale, outraging anti-captivity advocates. The card, typically accompanied by a request for continued donations to WWF features a photo of Gemini, a captive female beluga at Marineland in Niagara Falls.

Gemini was one of several wild belugas originally captured from Russian hunters and imported in 1999 after the Canadian Department of Fisheries and Oceans denied Marineland a permit to capture belugas within Canadian waters.  Gemini has given birth to several calves at Marineland including Sasha who died in 2010 at only 2 years old.  Former Marineland head trainer Phil Demers who throughout his 12 years at Marineland interacted with Gemini, found the card featuring her extremely tasteless:

“I’m baffled as to why an organization would use her image to spread holiday cheer and promote the protection of one of Canada’s amazing species.”

WWF is an organization that supposedly promotes the conservation and protection of animals and their habitats.  They have come under fire for their continued support of polar bear hunting and the seal hunt in Canada and are also partnered with Seaworld’s conservation program.  Animal advocate and Marineland critic Mike Garrett was disappointed in the card:

“For a group such as WWF Canada to send out a holiday card with a photo of a beluga held captive at one of the worst facilities in North America is pretty deplorable.  Many Canadians believe as part of their mandate, WWF is supposed to be advocating for wildlife in their natural habitat not promoting their captivity.”

On their Facebook page commenter Alex Thomson questioned WWF Canada about their stance on marine mammal captivity and received this reply:

As anyone who has ever been to Marineland can tell you, there is no science based conservation plans taking place there.  As for WWF Canada, one of their current campaigns includes asking for donations to “help keep the Beaufort Sea brimming with wildlife” which includes wild belugas.