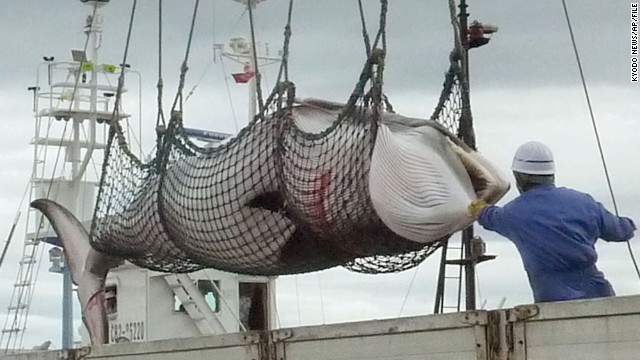 This file photos shows a minke whale being unloaded at a port during a whale hunt for scientific purposes in Kushiro, Hokkaido.
STORY HIGHLIGHTS

(CNN) — Japan is set to go ahead with some of its whaling activities even though a recent international court ruling ordered the country to end its whale hunt in the Antarctic.

The Japanese fisheries ministry announced last week it would still proceed with a smaller research program in the northwest Pacific.

The mission’s departure, originally scheduled for April 22, was postponed until after a state visit by U.S. President Barack Obama, according to local media reports. The whaling fleet is now expected to leave Japan’s shore on Saturday.

Biologists fight to save tangled whale

Japan is also making preparations for a new proposal which could see its whaling fleet return to the Antarctic as early as next year, the ministry said.

Both announcements by the ministry sparked renewed anger among environmentalists, who say Japan’s research program is a thinly-veiled attempt to circumvent a ban on the commercial whale meat trade.

The head of Greenpeace Japan, Junichi Sato, said the fisheries ministry’s latest announcement was a “huge disappointment” that flew in the face of the U.N. court’s ruling and threatened to “damage Japan’s international standing.”

“If they do it as a genuine scientific program they won’t be able to kill very many whales and it wouldn’t be worthwhile for them to go down there (to the Antarctic),” he said.

Although few people in Japan regularly eat whale meat, many support the controversial whaling research program. A survey, released by the Japanese newspaper Asahi Shimbun earlier this week, found that 60% of respondents thought the research whaling should continue, while around 23% said the practice should stop.

Almost half of those who thought the research should continue said they didn’t eat whale meat. Only 4% said they consumed whale meat “occasionally” while 10% said they ate it on “rare occasions,” according to Asahi Shimbun.

Japan’s Agriculture, Forestry and Fisheries Ministry said the catch from the upcoming Pacific mission would be reduced from 380 whales to 210 and nonlethal methods for carrying out the research would be explored, according to a statement released by the ministry last week.

In a separate statement, fisheries minister Yoshimasa Hayashi said Japan would conduct research whaling “based on international law and scientific evidence,” while firmly maintaining its policy of “aiming for the resumption of commercial whaling.”

Tokyo is making preparations to submit a revised whaling plan for both the Pacific and the Antarctic to the International Whaling Commission by this fall, ahead of the 2015-16 season.

He also said Japan would explore ways to deal with anti-whaling activists, who are often involved in scuffles with Japanese whaling vessels.

The International Whaling Commission banned commercial whaling in 1986, but Japan has continued to carry out whale hunts by taking advantage of a loophole that permits the killing of mammals for scientific research, despite strong criticism from international anti-whaling campaigners and governments of countries that include the United States and Australia.

The International Court of Justice ruled on March 31 that Japan can no longer continue its whale hunt in the Antarctic after the court failed to find evidence the program had legitimate research value.

In the Asahi Shimbun poll, 40% of Japanese respondents said the court’s decision was reasonable while almost as many, 39% said it was unreasonable.