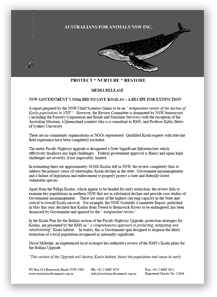 A report prepared by the NSW Chief Scientist claims to be an “ independent review of the decline of Koala populations in NSW “.  However, the Review Committee is dominated by NSW bureaucrats ( including the Forestry Corporation and Roads and Maritime Services) with the exception of the Australian Museum, a Queensland scientist who is a consultant to RMS, and Profesor Kathy Belov of Sydney University.

There are no community organisations or NGOs represented.  Qualified Koala experts with relevant field experience have been completely excluded.

The entire Pacific Highway upgrade is designated a State Significant Infrastructure which effectively disallows any legal challenges.   Federal government approval is flimsy and again legal challenges are severely, if not impossibly, limited.

In estimating there are approximately 36,000 Koalas left in NSW, the review completely fails to address the primary cause of catastrophic Koala decline in the state.  Government mismanagement and a failure of legislation and enforcement to properly protect a state and federally listed vulnerable species.

Apart from the Pilliga Koalas, which appear to be headed for early extinction, the review fails to examine key populations in northern NSW that are in substantial decline and provide case studies of Government mismanagement.    These are some of the highest carrying capacity in the State and critical to overall Koala survival.   For example, the NSW Scientific Committee Report, published in May this year, declared that Koalas from Tweed to Brunswick Rivers to be endangered, has been dismissed by Government and ignored by the “ independent review.”

In the Koala Plan for the Ballina section of the Pacific Highway Upgrade, protection strategies for Koalas, are presented by the RMS as “ a comprehensive approach to protecting, mitigating and rehabilitating” Koala habitat.    In reality, this is Government spin designed to disguise the likely extinction of a local population recognised as nationally significant.

David Milledge, an experienced local ecologist has authored a review of the RMS’s Koala plans for the Ballina Upgrade.

“This section of the Upgrade will destroy Koala habitat, bisect the population and cause its early demise.  So called mitigation measures are untested and likely to accelerate the destruction.   With curious logic, the construction is heralded by the RMS as beneficial to Koalas, claiming the road- works “ will slow the rate of eventual extinction.”

David Milledge’s review concludes that Ballina’s Koala eastern sub-population will suffer a combination of impacts caused by the construction.   This sup-population will be isolated by the Upgrade, placing the animals on an extinction trajectory from which the population is unlikely to recover.

He said: “ the eastern sub-population will have half or more of its foraging habitat destroyed by clearing for road construction and special disruption is likely within the eastern sub population resulting from the breakup of Koala “ cells” that are likely to contribute to population breakdown.

“ The potential for mortality by vehicle strike and dog attacks will be increased with exclusion fencing which will funnel Koalas into the Wardell urban area with increased risks.

“Of major concern is the intention by RMS to use an untested experiment to drive Koalas from their home range trees which are to be felled.   The RMS will collar and ring-bark feed trees to “ encourage” Koalas to move to other areas.   These “ other areas” are not identified.”

Local ecologists indicate serious problems for Koalas forced to move from their home range.   Displaced Koalas will be disoriented and stressed.   Accustomed to their home range, knowing their environment, many of these Koalas are not likely to survive in the long term.

Connectivity structures are condemned by the Milledge review.

“ If the effectiveness of connectivity structures had been seriously addressed, then road viaducts would have been proposed for Koala hotspots and for existing movement corridors rather than mainly drainage culverts.”

Sue Arnold, Co-ordinator of Australians for Animals Inc, a charity with years of experience in Koala conservation condemned the NSW Chief Scientist report as “ smoke and mirrors” . She said the document completely fails to address the real reasons for the significant decline, with recommendations that are  incapable of providing protection for remaining Koalas and their habitats.

“ The review fails to deal with the ramifications of the Baird government’s Biodiversity Conservation and Local Land Service bills.   It does not address the fact that offsets can now be made in dollars.    Nor, does the review explain how the NSW government can provide habitat protection for Koalas under the new laws when its Chief Scientist claims that there is insufficient information to identify all habitats and colonies?

“ The Baird government is the most anti environment government Australians for Animals Inc has seen in its 30  years of operation.  The Premier has ensured protests will result in jail term and  that access to the Courts in terms of legal challenges by the public interest is severely limited. The NSW Chief Scientist’s “ independent review” is an injunction for a Parliamentary inquiry into the deliberate destruction of threatened and endangered wildlife in NSW with a special focus on Koalas