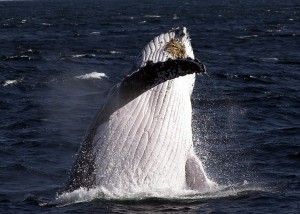 News reports that WAgovernment has given consent to Woodside to construct the James Price  Point Gas Hub in the Kimberleys is a disaster.

Dr Paul Vogel, Chair of the West Australian Environmental Protection Authority made the decision after all other members of his panel disqualified themselves.

Claiming to have imposed strict conditions on the development, Vogel cites the suspension of marine pile-driving impacts and blasting at night during the peak southern migration of Humpback whale pods.

This condition can only be described as unadulterated crap !   It’s obscene and ridiculous to assume that Humpback whales only travel at night.   Who can possibly be advising this man given that some of the best experts on Humpback whales are in Western Australia.

The noise generated by the construction of this hub, combined with pile driving, dredging, blasting and massively increased shipping will destroy not only the Humpback nursery in the area but may force the whales to change their ancient migration route.

On the east coast we have the Gladstone/Great Barrier Reef nightmare unfolding with massive increases in noise in the marine environment, slap bang in the middle of the Humpbacks migration route to their breeding grounds.
Now on the west coast of Australia we have the foreshadowed destruction of the most critical nursery area of Southern Hemisphere Humpback whales.

Ms Gillard is currently in WA talking up her carbon tax.  As usual, her government continues to ignore the immense destruction of Australia‘s unique and precious environment which is a juggernaut rolling over this country.

Our democracy is disappearing fast as the resource industry and its partners, the Gillard government and Coalition opposition open the floodgates.

The consent by WA EPA must be over-turned.   The fate of Southern Hemisphere Humpback whales cannot be left in the hands of egomaniacs and the greedy.