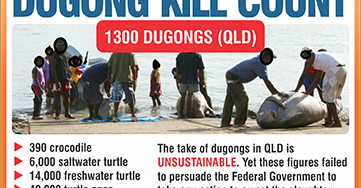 Dugong cows are devoted to their young. They stay together for the long period of calf dependency, babies usually straying no more than 1-3 body lengths from their mother.

They communicate with vocalisations.

Seagrass is the primary prey of dugongs. Shipping traffic, noise and human activities can disturb their feeding. Cyclone Yasi and serious Queensland flooding have wiped out many of the critical seagrass areas on which dugongs depend.

Calves often swim above their mothers to reduce visibility to predators. However, the greatest and most serious predator is the human. Indigenous slaughter of dugongs is out of control and appalling cruelty is involved in many instances. Governments refuse to take action to stop the killing because Native Title trumps state and federal laws which protect these highly vulnerable animals.

There’s been a massive trade in illegal dugong meat coming from the Torres Strait to the Queensland urban coast where many Islanders now live.

Dugong populations are in a catastrophic situation with massive declines as a result of indigenous slaughter and the dumping of dredge spoil on their seagrass beds.

Scientists with expertise in dugongs identified dugongs on Queensland’s urban coast as “ critically endangered” before Cyclone Yasi struck. The loss of seagrass beds and continuing slaughter has been ignored by Governments, political parties and the mainstream media.

AFA’s research of scientific papers demonstrate a severe and potentially imminent extinction of the East Coast dugongs in the near future. Moreton Bay, close to Brisbane, is one of the last strongholds of these beautiful animals. Scientists are predicting a l7% loss of seagrass in the near future with grave outcomes for the dugongs.

The loss of these gentle animals is Australia’s shame.