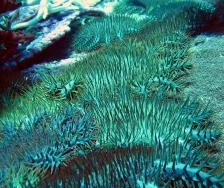 Crown of Thorns starfish invasions are local, not alien.

When crown-of-thorns starfish invade a reef in numbers, the results are devastating.

It’s been assumed that they show up like alien invaders, their larvae washing in from elsewhere and taking rapacious advantage of a virgin reef. But new evidence suggests that’s not the case. 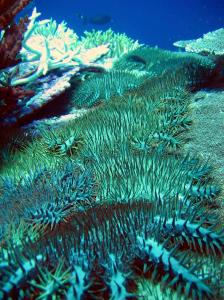 The new genetic work shows that most outbreaks seem to be sourced in the native starfish population—that perhaps something has changed in their environments to suddenly give them a massive opportunity to burgeon.

As Walt Kelly wrote for Pogo, “We have met the enemy and he is us.”

A copy of the new research is available here.

The paper was written by Molly A. Timmers of NOAA’s Pacific Islands Fisheries Science Center, Chris Bird, Rob Toonen and Derek Skillings of the Hawai`i Institute of Marine Biology at the University of Hawai`i, and Peter Smouse of Rutgers University’s Department of Ecology, Evolution and Natural Resources.

In Hawai`i, outbreaks have been attacked by divers with toxic syringes, injecting individual animals. In Australia’s Great Barrier Reef, outbreaks often occur in vast waves, working their ways down the length of the reef.

The team of scientists conducted genetic tests on the sea stars, only to find that they tended to be home-grown, not outsiders,

“This research has proved that outbreaks are not some rogue population that expands and ravages across central Pacific reefs. Instead, the authors hypothesize that nutrient inputs and favorable climatic and ecological conditions likely fuel outbreaks of local populations,” said a press release from the University of Hawai`i.

Why is this information useful? Because a lot of the response to the outbreaks tends to focus on killing the starfish themselves rather than attacking the cause of the population increase,

“This study is the first genetic survey of (crown-of-thorns) populations in which both outbreak and non-outbreak populations are surveyed across a broad region of the Pacific and the results are pretty clear that outbreaks are not jumping across large expanses of open ocean,” the release said.

The paper itself concludes: “Overall, outbreaks that occur at similar times across population partitions are genetically independent and likely due to nutrient inputs and similar climatic and ecological conditions that conspire to fuel plankton blooms.”

In plainer English, co-author Rob Toonen, of the Hawai‘i Institute of Marine Biology, said, “Our recommendation to managers is to seriously consider the role that environmental conditions and local nutrient inputs play in driving (crown-of-thorns) outbreaks,” said