What Is Happening To Alaska? Is Fukushima Responsible For The Mass Animal Deaths? 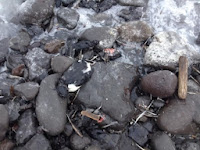 Why are huge numbers of dead birds dropping dead and washing up along the coastlines of Alaska?  It is being reported that many of the carcasses of the dead birds are “broken open and bleeding”.  The photo of some of these dead birds at the top of this article was originally posted by Alaska native David Akeya on Facebook.  You can find more photos of these dead birds right here. And of course it isn’t just birds that are dying.

As you will see below, something is causing mass death events among various populations of fish as well.  In addition, it has been reported that large numbers of polar bears, seals and walruses in Alaska are being affected by hair loss and “oozing sores”.  So precisely what is causing all of this?  Could Fukushima be responsible?  Authorities are claiming that all of this is being caused by “disease” or “harsh weather”, but are they actually telling us the truth?  Evaluate the evidence that I have shared below and decide for yourself….

#1 Something is causing large numbers of dead birds to wash up on shores all over Alaska.  The following is a report from Alaska Public Media about just one of these incidents…

Hundreds of dead birds washed up on the shores of St. Lawrence Island towards the end of November. And though the cause of the die off isn’t yet known, the quick response demonstrates a mounting capacity for dealing with unexpected environmental events in the region.

Scientists do not know why this is happening.  Some of them are blaming “harsh weather”.

For example, while skin ulcers and other conditions — hair loss, lethargy, oozing sores, bloody mucous, congested lungs — are affecting seals and walruses, it’s not known if the two species are suffering from the same sickness. And although much studying has been done to determine whether it’s the result of a virus or radiation, and no tests have linked these origins to the illness, it’s not yet known what the root cause is. Toxins and environmental factors, like harmful algae blooms and thermal burns, are under consideration. As is whether allergy, hormone or nutritional problems might play a role.

Wildlife experts are studying whether fur loss and open sores detected in nine polar bears in recent weeks is widespread and related to similar incidents among seals and walruses.

The bears were among 33 spotted near Barrow, Alaska, during routine survey work along the Arctic coastline. Tests showed they had “alopecia, or loss of fur, and other skin lesions,” the U.S. Geological Survey said in a statement.

Lake Babine Chief Wilf Adam was on his way to Smithers, B.C., on Monday for a discussion about whether to entirely shut down the food fishery on Lake Babine, something he said would be drastic and unprecedented – but may ultimately be necessary.

Mel Kotyk, North Coast area director for the Department of Fisheries and Oceans, said the department’s monitoring activities were finding one of the lowest runs in 50 years.
Only 453,000 sockeye are expected to swim along the Skeena this year, Kotyk said, compared to approximately 2.4 million last year, forcing all commercial and recreational Skeena sockeye fisheries to be closed.

#5 Something is causing Pacific herring to bleed from their gills, bellies and eyeballs…

Independent fisheries scientist Alexandra Morton is raising concerns about a disease she says is spreading through Pacific herring causing fish to hemorrhage.

Ms. Morton has called on the federal Department of Fisheries and Oceans to investigate, saying it could cause large-scale herring kills and infect wild salmon, which feed heavily on herring.

“I’ve been seeing herring with bleeding fins,” Ms. Morton said Monday. “Two days ago I did a beach seine on Malcolm Island [near Port McNeill on northern Vancouver Island] and I got approximately 100 of these little herring and they were not only bleeding from their fins, but their bellies, their chins, their eyeballs. These are very, very strong disease symptoms.”

#6 Some residents of Alaska are absolutely convinced that Fukushima is to blame for the rapidly declining fish populations.  For example, just check out the following excerpt from a recent editorial in one Alaskan newspaper…

We are concerned this hazardous material is hitching a ride on marine life and making its way to Alaska.

Currents of the world’s oceans are complex. But, generally speaking, two surface currents — one from the south, called the Kuroshio, and one from the north, called the Oyashio — meet just off the coast of Japan at about 40 degrees north latitude. The currents merge to form the North Pacific current and surge eastward. Fukushima lies at 37 degrees north latitude. Thousands of miles later, the currents hit an upwelling just off the western coast of the United States and split. One, the Alaska current, turns north up the coast toward British Columbia and Southeast Alaska. The other, the California current, turns south and heads down the western seaboard of the U.S.

The migration patterns of Pacific salmon should also be taken into consideration. In a nutshell, our salmon ride the Alaska current and follow its curve past Sitka, Yakutat, Kodiak and the Aleutian Islands. Most often, it’s the chinook, coho and sockeye salmon migration patterns that range farthest. Chum and pink salmon seem to stay closer to home. Regardless of how far out each salmon species ventures into the Pacific, each fish hitches a ride back to its home rivers and spawning grounds on the North Pacific current, the same one pulling the nuclear waste eastward.

We all know too much exposure to nuclear waste can cause cancer. And many understand that certain chemicals, such as cesium-137 and strontium-9, contained in said waste products can accumulate in fish by being deposited in bones and muscle permanently.

We are concerned our Alaska salmon are being slowly tainted with nuclear waste. We are worried about the impact this waste could have on our resources, and especially the people who consume them.

A Vancouver Aquarium researcher is sounding the alarm over “puzzling” changes he’s observed in the killer whale pods that live off the southern British Columbia coast.

Barrett-Lennard says the southern resident orca pod, which is found in the Salish Sea between Vancouver Island and the B.C. mainland, has lost seven matriarchs over the past two years, and he’s noticed a lack of vocalizations from the normally chatty mammals.

These kinds of things are happening further south along the Pacific coast as well.

For example, the recent death of thousands of birds down in Oregon is absolutely baffling scientists…

Residents have reported groups ranging from 10 to 200 dead or dying barn and violet-green swallows in barns and around other structures where they perch. The Oregon Department of Fish and Wildlife said the dieoffs appear to be worst close to rivers and standing water where the birds tend to gather.

The toll, estimated in the thousands, has stunned Fish and Wildlife specialists. “This type of mortality event is unprecedented and considered a rare and unusual event,” said Colin Gillin, wildlife veterinarian for the agency. “The effect on bird populations is unknown.”

Some scientists are blaming these deaths on “harsh weather”.

Do you buy that?

Clearly something very unusual is happening, and it should not be unreasonable to ask if Fukushima is at least partially responsible for all of this.

Without a doubt, the Pacific Ocean appears to be a much different place than it was before the Fukushima disaster.  In fact, one very experienced Australian adventurer said that he felt as though “the ocean itself was dead” as he journeyed from Japan to San Francisco recently…

The next leg of the long voyage was from Osaka to San Francisco and for most of that trip the desolation was tinged with nauseous horror and a degree of fear.

“After we left Japan, it felt as if the ocean itself was dead,” Macfadyen said.

“We hardly saw any living things. We saw one whale, sort of rolling helplessly on the surface with what looked like a big tumour on its head. It was pretty sickening.

“I’ve done a lot of miles on the ocean in my life and I’m used to seeing turtles, dolphins, sharks and big flurries of feeding birds. But this time, for 3000 nautical miles there was nothing alive to be seen.”

In place of the missing life was garbage in astounding volumes.

“Part of it was the aftermath of the tsunami that hit Japan a couple of years ago. The wave came in over the land, picked up an unbelievable load of stuff and carried it out to sea. And it’s still out there, everywhere you look.”

What in the world would cause the Pacific Ocean to be “dead” like that?

Where did all the life go?

Hopefully we will start to get some answers to these questions.

For much more on all of this, please see my previous articles entitled “28 Signs That The West Coast Is Being Absolutely Fried With Nuclear Radiation From Fukushima” and “Something Is Killing Life All Over The Pacific Ocean – Could It Be Fukushima?”

Meanwhile, radiation levels around Fukushima just continue to increase.  The following is from a recent RT article…

Outdoor radiation levels have reached their highest at Japan’s Fukushima nuclear plant,warns the operator company.Radiation found in an area near a steel pipe that connects reactor buildings could kill an exposed person in 20 minutes, local media reported.

The plant’s operator and the utility responsible for the clean-up Tokyo Electric Power Company (TEPCO) detected record radiation levels on a duct which connects reactor buildings and the 120 meter tall ventilation pipe located outside on Friday. TEPCO measured radiation at eight locations around the pipe with the highest estimated at two locations – 25 Sieverts per hour and about 15 Sieverts per hour, the company said. This is the highest level ever detected outside the reactor buildings, according to local broadcaster NHK.

And every single day, another 400 tons of very highly radioactive water gets released into the Pacific Ocean.  The total amount of radioactive material in the Pacific is constantly rising, and because many of these radioactive particles have a half-life of 30 years or longer, much of this material is going to be with us for a very, very long time.

This is turning out to be the greatest environmental disaster in modern history, and it is very far from over.