Following on the excellent documentary on Four Corners, many Australians and people from overseas will be asking what they can do to ensure the long term survival of Koalas.

In 1994, Australians for Animals  (AFA) presented an historic scientific submission to the US government supporting the listing of the Koala as a 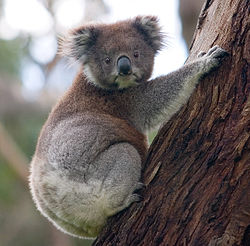 hreatened Species under the US Endangered Species Act (ESA).

At that time, a listing under the ESA was considered the most effective way of protecting an iconic species.

The submission took four years of effort by scientists, lawyers and researchers.  The final document which remains the most comprehensive history of the destruction of Koalas and their habitat was reviewed by five expert scientist.   In 1998, the Koala was successfully listed with a notation that the information in the scientific petition presented by AFA gave cause for concern about the over-all prospects for the species and its natural ecosystem .  The US government suggested that a further review of the situation was advisable.

No such review was ever conducted in Australia.  State and Federal governments continued to ignore the plight of the Koalas as more and more habitat was knocked down for development and forests clear-felled.

Many people are unaware of the critical role that Koalas play in the coastal forest ecosystems.  Koalas help regenerate forests by their dispersal behaviour, creating new areas and ensuring the continuation of healthy trees and forest ecosystems.

The most recognised global authority on species is the IUCN Red List ( The International Union for the Conservation of Nature).  An entry in the Red List indicates the status of the animal.  It’s important to be aware that this Red List continues to cite the Koala as an animal of Least Concern and that designation is supported by a number of scientists who claim to be experts on the Koala.  The listing status was made in 2008 and the Commonwealth Government has made no effort to upgrade the listing in line with Minister Burke’s pronouncements of threatened status in some states.

Recommendations for Action under the IUCN Red List are as follows as:-

“This species is present in numerous protected areas. Recommended actions for the species (Maxwell et al. 1996; Martin and Handasyde 1999; Gordon pers. comm.) include: complete and implement National Strategy for Conservation of the Koala (currently in draft form); develop appropriate models applicable to the diversity of habitat types utilised by the species; conduct regional and local surveys of distribution, assessment of tree preferences and identification of key critical habitat areas for conservation; formulate and implement detailed regional management plans for the conservation of these populations; manage populations to prevent over-browsing at some sites in Victoria and South Australia; develop positive community involvement in Koala conservation and management.”

A National Strategy for Conservation of Koalas was developed in 2009.   AFA can safely claim it has, like other National Strategies for Australia’s wildlife, been useless in protecting remaining habitat and Koalas.

Without the dedicated efforts of Koala carers, the Port Macquarie Hospital and the Australian Zoo, and many grass roots community groups, there would be a much greater loss of the species.   Governments have nothing to be proud of in their continued approval of destruction to Koala Habitat.

Every Australian politician, whether State and/or Federal with Koalas should be made responsible for the protection of Koala habitat.   To lose this species would be an international disaster and there’s little doubt that the writing is on the wall.

Estimates of the remaining Koala population are significantly over optimistic.

A brief history of the Koala and efforts to protect the species can be found at:-

The listing of the Koala in the IUCN Red List was assessed by the following scientists.  Their findings, which describe the Koala as a “ pest species” in some areas, are typical of the overall lack of concern for the future survival of these unique and special creatures.

2008 Assessor/s: Gordon, G., Menkhorst, P., Robinson, T., Lunney, D., Martin, R. & Ellis, M. Reviewer/s: Lamoreux, J. & Hilton-Taylor, C. (Global Mammal Assessment Team) Contributor/s: Justification:
Listed as Least Concern in view of its wide distribution, presumed large population, and because it is unlikely to be declining at nearly the rate required to qualify for listing in a threatened category. This is a high profile species that varies greatly in population size and density across its range, and requires intensive management in areas where it is considered a pest species, as well as in those regions where it is known to be in decline.

It’s hard to believe but l,760 Koalas were taken into care by Queensland wildlife hospitals, including the Australian Zoo Hospital, Moggill Koala Hospital and Currumbin Sanctuary Hospital in the last l6 months. 683 Koalas had to be euthanased because their injuries or illnesses were so severe.  According to a report in the Sunday Mail, 23,725 Koalas have been taken to wildlife hospitals since l997, and most were euthanased.   Dog attacks, collisions with cars, destruction of habitat, disease and terrible neglect by the State and Federal governments are taking their toll.

If koalas are to survive, they MUST HAVE HABITAT which is protected from development,cars and dogs.