Lady of the Sea’ under threat

No dugong calves were seen in the southern Great Barrier Reef in a survey last year, and numbers are the lowest since the mid 1980s, indicating a dramatic decline in the endangered mammal’s population in the region.

The results show a reduction in fertility in response to the extreme weather conditions in 2011, which exacerbated a decline in their seagrass feeding grounds over several years.

Professor Marsh said severe weather along the Queensland coast in the summer of 2010/11 had affected the Great Barrier Reef’s endangered dugong population.

“The latest aerial survey by researchers from JCU of dugong distribution and abundance indicates a significant decline in the dugong population of the southern Great Barrier Reef,” she said.

“Although aerial survey estimates of dugong are underestimates, they track trends in the population.

“The recent survey report, estimates a total number of about 3000 dugongs in south-east Queensland’s Moreton and Hervey Bays, similar to the previous aerial survey figure in 2005.

“However it was a different story in the southern Great Barrier Reef region where the estimated size of the dugong population – about 500 to 600 – was the lowest since surveys began in 1986.

“Similarly, while the proportion of dugong calves in Hervey and Morton Bays was within the range expected for normal conditions, no calves were seen in the southern Great Barrier Reef during the 2011 survey, indicating a reduction in fertility in response to the extreme weather in 2011 which exacerbated a decline in their seagrass feeding grounds over several years.”

Professor Marsh said dugong mortalities recorded by StrandNet (the Queensland Marine Wildlife Mortality Database) in 2011 were the highest ever recorded. 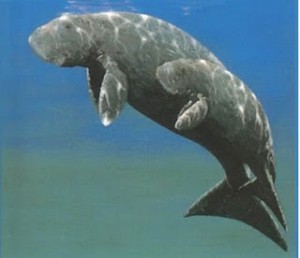 “The data indicates that Townsville and Gladstone were the dugong mortality ‘hotspots’. In both these places seagrass was in poor condition.

“The report’s recommendations include several measures to protect dugongs along the coast, including increasing the proportion of protected dugong habitat in Moreton and Hervey bays to support their high density dugong populations.

“They also recommend re-establishment of a regional Indigenous coordinating group to coordinate responses of Traditional Owners to extreme weather events in their Sea Country and the introduction of regional zoning of the East Coast Inshore Finfish Fishery to minimise interactions between fishers and dugongs.”

Professor Marsh said the report also called on the Queensland and Australian Governments to develop policy that favours the establishment of several well managed mega-ports along the GBR coast, which would pose fewer risks to dugongs and their habitats than a larger number of smaller ports.

This research was conducted with the support of funding from the Australian Government’s National Environmental Research Program.