Dugongs are dying in Gladstone Harbour according to reports we’re receiving from a number of sources.

Animals are being hauled out of the water, dead or dying and the authorities are busy covering up the huge mortality which is directly connected to the dredging.   The dredging is impacting Rodds Bay Harbour, a dugong sanctuary.  What a joke !

When Australians for Animals inquired of the Federal government just exactly how many turtles and dugongs had been killed by dredging, we received an incredible answer.

Two turtles. No dugong deaths reported.  Yet the Queensland government’s own mortality figures show a huge increase in turtle, dugong and dolphin mortality in Gladstone Harbour. 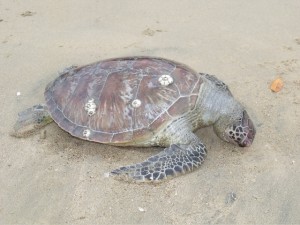 Then the next question which must be asked is what exactly does death caused by dredging mean ?  Does it mean if the animal gets sucked up by the dredge ?  Or dies from starvation as a result of its major food source, seagrass meadows, being dredged from the seabed ?  Or because of ship strike with the massive increase in vessels going back and forth to Curtis Island over a once tranquil Harbour ?  Or because the food source, assuming there is any, is polluted with heavy metals and toxic substances causing death ?

One fact which is abundantly self-evident is that neither the Queensland State government nor the Federal are even slightly interested or concerned about the extent of mortality which is the hallmark of the Gladstone Ports Corporation operation.

The charity has also been told that boats are going out late in the evening and early morning to collect dead bodies so they can’t be seen or reported.  We heard from one source that anyone travelling on the ferry going back and forth from Gladstone to Curtis Island is told to keep quiet about any dead animals seen on the journey.

The governments have again changed the rules which governed the limits of turbidity allowed in the Harbour.  It now appears that dredging can go over the limit for up to seven days.  A new system of ” light monitoring” of seagrass has been introduced which will do absolutely nothing to protect any remaining dugongs and turtles.

We’re also hearing that there’s been a huge mortality in dolphins which habituate the coastal area off Curtis Island.

The management of this huge LNG development is a national scandal.  The suffering and trauma impacting marine animals is un-forgiveable.  Governments need to remember that Australia is still a democracy and even if our voices have been quarantined, the protest will continue until we succeed in protecting the innocent species caught up in this disaster.