Once upon a time, dugongs were plentiful off the east coast of Australia. They were times before humanity’s greed overwhelmed the environment, destroying the precious natural heritage of our world.

“One of the fishermen of Wide Bay told the writer.. he had seen a mob of dugong which appeared to fill the water with their bodies. He computed this school to be half a mile wide and from three to four miles long. The writer’s boat once anchored in Hervey Bay, in one of those channels through which the tide passes when running off the flats. For between three and four hours there was a continuous stream of dugong passing while the tide went out, which those in the boat could only liken to a rush of cattle out of a stockyard after a general muster.. some thousands must have gone out with the tide.” 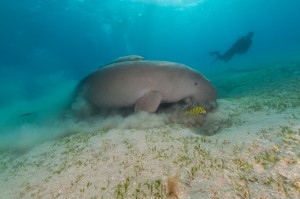 Dugong females are devoted to their young. They remain together during the long period of calf dependency, their young rarely straying more than 1-3 body lengths from their mothers. They communicate with vocalisations. When travelling, calves often swim above their mothers reducing their visibility to predators.

Dugongs spend a large part of their day feeding on seagrass. When shipping traffic and other human-related activities disturb their feeding, dugongs may find it difficult to feed long enough to satisfy their nutritional needs. The problem is much worse when their food supply is limited as it is now as a result of Cyclone Yasi and major floods over recent years.

The inter-connectedness between dugongs and seagrass is a wonderful example of nature’s bio-feedback mechanisms. Dugong faeces provide a nutrient source to the seagrass they feed on, maintaining local patches and ensuring vibrant seagrass beds which in turn provide a nursery for fish stock.

Without dugongs and turtles munching on seagrass beds, depositing their faeces to provide the necessary nutrients, coastal fish nurseries are significantly impacted.

We know from concerned indigenous leaders there’s a roaring trade in illegal dugong meat coming from the Torres Strait to Queensland where many Islanders now live.

There has never been a more desperate need for a total ban on the killing of dugongs in Australian waters.