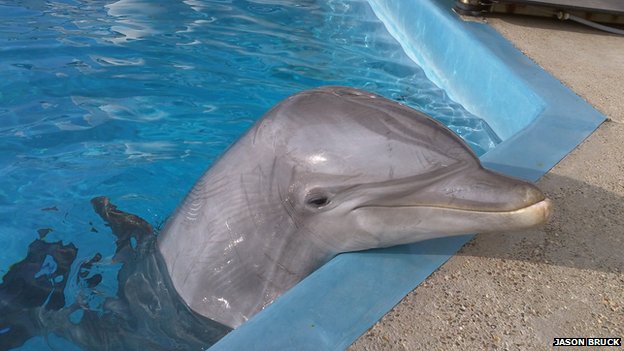 Kai was one of the dolphins in the study, he was 16 years old when this picture was taken
Continue reading the main story

Forget about elephants – scientists say that dolphins have the longest memories yet found in a non-human species.

Researchers in the US say that even after 20 years of separation, dolphins could recall the whistles of former companions.

The authors believe that these long-term memories are a product of the complex social connections that dolphins have evolved.

The research is published in the Proceedings of the Royal Society B.

In the study, the scientists used information on the relationships between 56 captive bottlenose dolphins that have been moved for breeding purposes between six different zoos and aquariums in the US and Bermuda.

The records, dating back decades, showed which of the dolphins had been housed together.

The researchers then played recordings to the dolphins on underwater speakers of the signature whistles of animals they had once lived with, and measured their responses.

“When they are familiar with the call, the dolphins are more likely to approach the speakers for longer periods of time,” said Dr Jason Bruck from the University of Chicago who carried out the study.

“They will maintain contact with the speaker – if they are unfamiliar with the call they are more likely to ignore what I am playing. It’s unprecedented in the study of animal behaviour to find memories this long.”

Dr Bruck highlighted the case of two female dolphins called Allie and Bailey. They had once lived together in the Florida keys when they were very young. 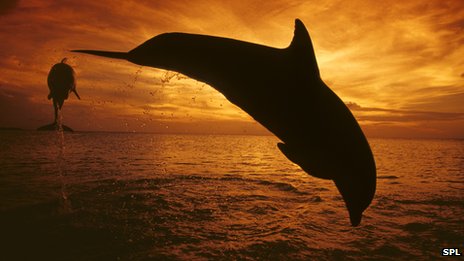 Bailey now lives in Bermuda but when a recording of Allie was played, she instantly responded in even though it was was 20 years and six months since they had been in contact.

Dr Bruck says this type of response was typical. Compared to unfamiliar calls, there was a clear pattern in the data where dolphins responded significantly more to whistles from animals they had once known, even if they hadn’t seen or heard them in decades.

To check that the dolphin’s response was due to recognition of a former companion, Dr Bruck would also play a test recording of an unfamiliar bottlenose that was the same age and gender as the familiar animal.

The researchers believe that the complex nature of dolphin social systems is behind the long term memory effect.

In the ocean, dolphins have a fluid social arrangement that scientists term a “fission-fusion” model. They may leave one group and join others many times in their lifetimes. 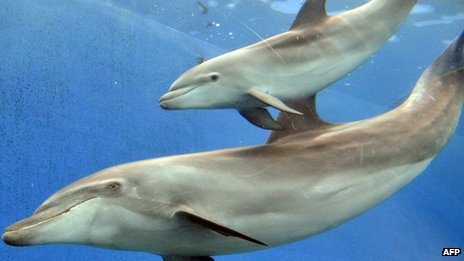 “It is important for them to recall the calls of dolphins they have had previous encounters with, to decide whether or not that’s someone they want to approach when they hear that whistle about a mile out, or whether they want to avoid that individual,” said Dr Bruck.

“Having a long term social recognition for that ecological reason can be the difference between an animal having a very negative social interaction and a positive one.”

According to the researchers, a dolphin’s abilities to recall events indicate that the cetaceans have a level of cognitive sophistication comparable to humans, chimpanzees and elephants.

While elephants are also reputed to have extremely long memories of up to 20 years, there is little scientific evidence of their abilities outside of family relationships.

In this research paper, the dolphins were able to remember family members as well as strangers.

In recent weeks, another study has shown that dolphins have their own signature whistles that appear to have the same function as names do for humans.