Great Barrier Reef dredging could be more damaging than thought 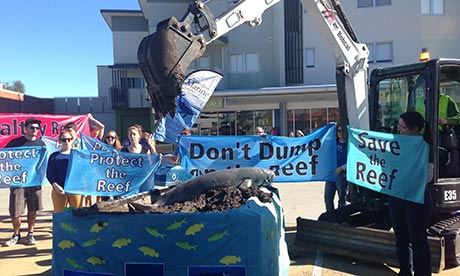 A protest against dredging around the Great Barrier Reef. Photograph: Petrina Berry/AAP

Dredging could be more harmful to the Great Barrier Reef than previously thought, a government-commissioned report has found, amid fresh warnings over the impact of coastal industrialisation on sea turtles and dugongs.

The WWF claimed the report proved that the dredging and dumping of seabed sediment near the reef should be banned.

Last week, the environment minister, Mark Butler, deferred a decision on whether to allow the dredging of the seabed to enlarge the Abbot Point port, near the Queensland town of Bowen, to allow for the export of more coal.

Butler said that more time was needed to assess a report into the impact of dredging and the dumping of it within the Great Barrier Reef Marine Park, as proposed by North Queensland Bulk Ports.

The report, undertaken by consultants Sinclair Knight Merz, states that spoil from dredging travels a lot further than previously thought, with dumped sediment capable of being disturbed repeatedly by severe weather. However, it doesn’t rule out dumping dredged waste at sea and suggests various locations near current ports that would do the least damage to coral and other marine wildlife.

Previous government analysis, including by the CSIRO, has blamed flooding rather than dredging for rising death and disease among the reef’s fauna, in particular the heavily dredged area of Gladstone.

Richard Leck, Great Barrier Reef campaigner at the WWF, told Guardian Australia that about 40m tonnes of dredged spoil would be dumped into the World Heritage Area if all port development projects were allowed to proceed.

“The science has shown that the resilience of the reef is incredibly low at the moment,” he said. “The government is spending $400m on improving reef water quality by 1-2% a year, which seems like a crazy amount of money to spend when you’re dumping 40m tonnes of waste at the same time.

“There’s not enough consideration of the alternatives to dredging, which is an outdated practice. We should be getting a lot smarter about using infrastructure in order to minimise the amount of dumping, especially when ports are operating at 50% capacity on the reef.”

The Turtle Island Restoration Network, a US conservation group that visited Australia this week, has warned that coastal development in Queensland could push several species of sea turtle towards extinction.

The Great Barrier Reef plays host to six species of turtle, which are threatened by boat strikes, water pollution and the direct impact of dredging.

“The reef is home to some of the most amazing turtle species in the world, which rely on a healthy environment for their future,” said Teri Shore, program director of the network.

“The Australian Flatback lives entirely in waters close to shore and sandy beaches, making them highly vulnerable to coastal port developments and shipping. Leatherbacks, which are also in jeopardy, live more in the open ocean where increased ship movements will take their toll through greater injury and death.

“Ship strikes alone have killed 45 turtles in Gladstone Harbour since the Curtis Island LNG project began, compared with an average of two a year in the past decade.”

There are also concerns over the prospects of the dugong, which has suffered from the loss of seagrass, its primary food, from Cyclone Yasi in 2011. Conservationists claim dredging is also to blame for the species’ decline.

A presentation compiled by Australians for Animals and sent to the environment minister warns that large numbers of dugongs are being stranded on beaches and that dredged spoil is wiping out vast tracts of seagrass. Industry denies that seagrass is severely damaged by dredging.

Australians for Animals said the dugong population on the urban coast of Queensland is “almost certainly on the road to extinction”.

“Future port development will ensure the non-recovery of the species,” it said. “There has been no attempt by federal or state governments to estimate the cost of losing the dugong population, nor any urgent action to ensure protection of the remaining sparse numbers.”

Correction, 16 August 2013: A reference to Animals Australia should have been to Australians for Animals. This has been corrected.